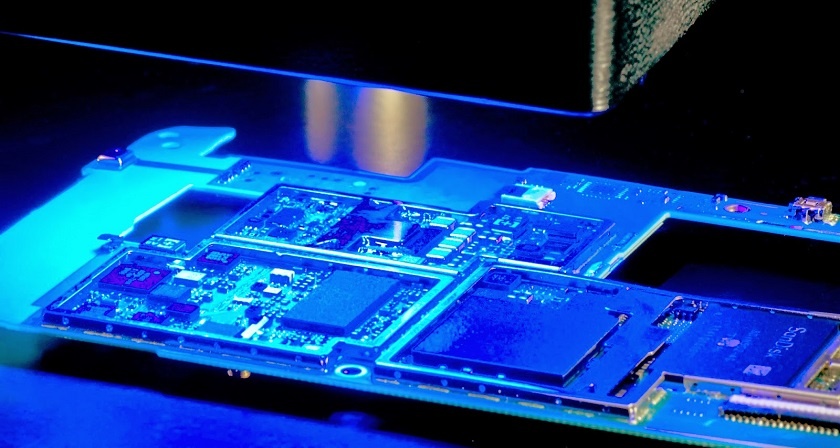 The majority of light curing adhesives are free radical curing, i.e. acrylic based. These types of adhesives have many benefits (learn more about the differences). One disadvantage, however, can be oxygen inhibition. When oxygen inhibition occurs, the surface of the adhesive or coating can feel sticky, even after curing. This is especially troublesome for applications where the UV acrylic will have a larger area in contact with the surrounding atmosphere, for instance PCB coatings. Let’s look at what can be done to avoid this effect!

A radical curing UV acrylic cures as a result of the formation of extremely reactive radicals. These radicals quickly form polymers and cross-links (see our post on the basics of UV curing adhesives). Often when using the correct type of light, the reaction happens so fast that a hard and dry surface is the result. In some cases though, the smaller building blocks of the adhesive can get inhibited by oxygen (an unwanted side reaction) from the surrounding air. The effect of this inhibition is that these components remain on the surface and do not cure. You will be able to feel if this is the case since the surface feels sticky and can even leave traces on your glove.

Oxygen molecules are almost always present but will not make it far into the adhesive joint. For this reason, surfaces closest to the air during the curing process have the greatest risk of being subjected to oxygen inhibition.

How to avoid oxygen inhibition

The faster a light curing adhesive cures, the less time oxygen has to inbterrupt the curing process. By increasing the intensity of your UV lamp, the curing speed will also increase. The intensity can be increased by using a more powerful lamp, several lamps at a time or by reducing the distance between the lamp and adhesive.

Curing your adhesive for a longer period of time will generally reduce the effect of oxygen inhibition and increase the degree of curing.

Higher energy light also results in a faster degradation of photoinitiators. This gives faster cure times and less time for oxygen to interfere. Short wavelengths contain more energy than long, and it can therefore be advantageous to use a short wavelength lamp – if the adhesive is adapted for it.

The most effective method of minimizing oxygen inhibition is to simply remove the oxygen. Unfortunately, this is also the most expensive and difficult method. Often, nitrogen gas or argon is used to form a “blanket” over the adhesive as it cures.

Another option is to limit the contact between oxygen and adhesive using for example a plastic film to cover the adhesive. Then you can cure the adhesive through that. Either, the plastic film is left on or removed once the curing process is complete. Make sure that the plastic film used is not UV blocking for the specific wavelengths used for curing.

5) Minimize adhesive outside of the joint

This tip is of course difficult follow if it is a coating or other type of protection that is giving you issues. Since it is only adhesive in contact with the surrounding atmosphere that is prone to oxygen inhibition and not adhesive inside of a bond, the problem could be that there is too much adhesive outside of the joint. Perhaps a change in joint design could help?

Certain products are more prone to oxygen inhibition than others because of their formulation. Therefore, a different adhesive with similar mechanical properties could be better suitable. Other typs of light curing adhesives (that are not radical curing) could also be an option. For example an epoxy based UV curing adhesive.